Is your Facebook fan page a cocktail party, a barbecue, a conference or a drum circle?

The funny thing about social networking is…we often forget that it’s just a virtual party. It’s not about amassing tons of “fans” so you can have the biggest party — it’s about inviting the right people and serving tasty snacks and drinks.

You know what happens when you talk sex or politics at a party — dead silence.

A cocktail party is NOT the place to pull out a gigantic billboard and say HEY BUY MY PRODUCT! (Unless you are a paid sponsor with a table or booth.)  And imagine if you pulled up your shirt and showed off your appendix scar?

But people do this all the time on Facebook! They forget it’s a party.

A great Fan page is an authentically engaged community where you have a conversation — even better if your tribe cares about what you have to say and shares it with their communities. At a party this is called gossip and word of mouth. On Facebook it’s called sharing and viral marketing.

Remember — a great party is not about QUANTITY it’s about QUALITY. Be selective. Invite the right people. Dress to impress — or stand out in the crowd. Serve good spirits and keep the music upbeat and the conversation as bubbly as champagne.

We are not collecting fans or contacts for Ego — we are collecting real human beings and we should care about them as much as we hope they will care about us.

Think about the real world equivalent of your Fan page. How would you interact in these different real world parties or events?

And here’s a great metaphor for Fan pages from #socialmediamixology: 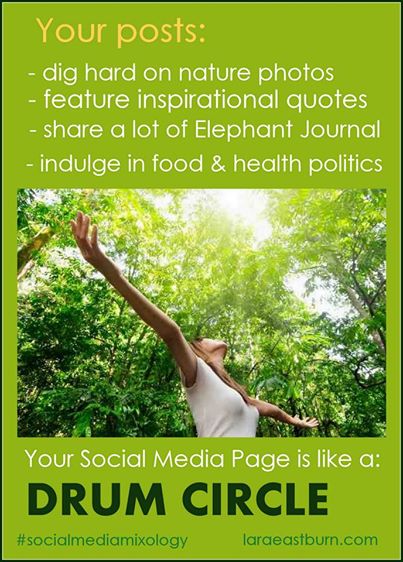