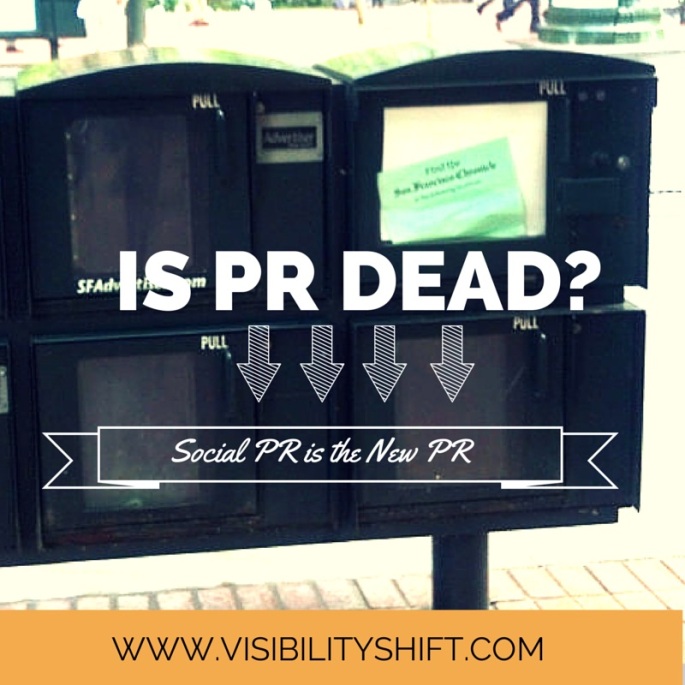 It’s evolved into something much more powerful and effective. Social PR.

I think that PR and social media are not separate anymore — and are in fact the same thing.

I’ve seen social media evolve over the past 30 years, from CompuServe to the WeLL to AOL to Craigslist to Ryze, then Friendster, MySpace, Tribe.net, blogging, and today, Twitter and Facebook.

You cannot separate “PR” and “Social Media.” They must be on the same page. The strategy must be interwoven.

Your social media, PR, marketing, web and advertising teams need to talk to each other.

Your PR strategy must be a Social PR strategy. You must evolve from the 1990s idea that “announcing to the media” is any different than “talking to your customer”.

You’re communicating directly to the public.

It’s not a one way broadcast anymore. It’s a multichannel conversation.

Today you talk to everyone at once.

Your customer is there. Your investors are there. The press are there. All in the same room.

You must take social media seriously as the front line of your brand, pay attention to it, and stop posting lame, idiotic, poorly written, typo-riddled, boring dreck.

Social media is the front line of your brand!

Why is Facebook worth billions — and newsracks are empty?

Today, a single Facebook post can easily reach 1 million people. That’s more than the circulation of most daily newspapers.

A Facebook ad can reach more customers for $5 than any other form of marketing ever devised in the history of mankind.

And you’re outsourcing social media to the cheapest possible, lowest level employee you can find?

Get rid of that 1990s idea that a newspaper article is more influential than a Tweet, a post or even your own blog.

You used to have to own a TV network to have influence. Today, a kid in their bedroom could have more viewers on YouTube than Oprah.

A musician or DJ who happens to have 100,000 fans or friends could be much more influential than a columnist or a journalist. (Many magazines don’t even reach 100,000 subscribers.)

Have you taken the train to work lately?

Do you see anyone reading a print publication? I don’t.  This is what the train looks like on a typical morning in San Francisco.  And these guys in t-shirts are your target audience.

Do you see them reading the banners on the bus? Billboards? Newspapers? Do they look like businessmen in stock photos?

And they’re probably not reading your website on that little screen unless it’s mobile-enabled.

You need to start taking Social Media seriously as the front line of your communications strategy.

It’s not an afterthought to be delegated to Interns, your receptionist, or “maybe I’ll get to it later”.

Social media is the front line of your brand.

Social media is where you get to tell your own story. Where you generate your own news. Where you build relationships with the media. And where you let your customers know about your press coverage.

But just social media isn’t enough. Because newspapers and magazines are still important. That’s because most readers discover the news on Social Media, and because reporters and publications have influential followings on social media.

Newspapers and magazines are still very influential –– they have high page rank and authority in Google, so getting mentioned in them does wonders for page rank and SEO. They drive traffic to your website — forever.

To do viral content marketing effectively, your messages must be created specifically to reach influencers who spread the word further. And you must include those influencers in your community.

This also means, simply, that your “friends” on your social network also happen to be reporters, freelance writers, columnists and editors and they “discover” the story ideas you share on their news feed. (This is kind of like sending out a press release only much faster.)

These days, instead of relying mainly on email pitching and press releases to announce news, I use Facebook, LinkedIn and Twitter to build relationships with press and influencers.

Try following and befriending every member of the media or influencer crucial for your product. You’ll be surprised how many follow you back.  And they’ll follow what you say — so make it great content, moderated by a professional who is talented in storytelling, community building, customer support, relationship building and conflict resolution. (Hint: they’re probably not even close to entry level.)

They spread the word for you to their networks, which include their Fan pages, Twitter and the blogs and publications they write for.

Some of these influencers are traditional print or TV press.

Try discovering who among your followers and friends champions your brand and spreads the word most frequently. Reward them. Thank them. Give them free tickets and favors.

Over time, you create authentic, engaged communities who will be advocates of your brand. Who tell your story. Who spread the word for you.

Do Social PR. Because, social media is the new PR.

I am a storyteller. I am a bridge between the worlds of high tech and high touch. The main communities I build are between thought leaders in Technology, Entertainment and Sustainability. (Kind of like a TED conference.) These are the early adopters, risk takers and super connected connecters who can set your ideas on fire! As a veteran Silicon Valley tech PR executive and product launch visibility expert, I have launched more than 30 paradigm-shifting products and consumer technology companies in my career -- products that changed your life and are used by tens of millions of consumers. I was on the teams that introduced major innovations we now take for granted -- like email, video editing, ink jet printers and mobile devices. I've promoted products that reached 5 million to 40 million customers -- paying customers, not eyeballs. We did this almost 100% with free PR and social media -- not paid advertising. Increasingly all business must be social, sustainable, sharable and conscious. And I believe social media is the catalyst of this conscious convergence and shift. I've learned that it's not just about "content" or "engagement" -- it's about creating authentic communities around an event that share your news and spread the word for you. I combine social media with press relations, speaking engagements, events, social ads, email lists and street teams to generate waves of awareness that catapult your launch and sustain it. Move forward, into the future. I can help you make a Visibility Shift. View all posts by Giséle Bisson