On December 21, 2012, I had the opportunity to help coordinate one of the largest global synchronized moments in history — millions of people participating in a candlelight ceremony at dawn (5:11 am UT) to celebrate the Winter Solstice and the end of the Mayan Calendar.

We succeeded in getting more than 20 million people to watch a live streaming video broadcast for 72 hours continuously for three days.

It’s quite possible that these global events, streamed over the Internet and self organized by volunteers will soon surpass those numbers. It’s an enormous, overlooked opportunity for global brands to capture the attention of the Millennials, a fickle group that doesn’t watch TV anymore.

When have we ever had the technology to simultaneously watch the sunrise at ever sacred site in the planet before? This was that moment when it shifted.

How significant is this?

– 113 million people in the US watched the Superbowl in 2012 — which was most watched television event in American history.

3.1 viewers saw a television PR campaign I participated in for Hewlett  Packard in 1992 for the launch of their first wireless palmtop device — which was then thought to be an incredible number. This involved an astronomical budget, multiple PR agencies, a press conference at the Rainbow Room and professional b-roll.

It’s quite possible that these global events, streamed over the Internet and self organized by volunteers will soon surpass the SuperBowl. It’s an enormous, overlooked opportunity for global brands to capture the attention of the Millennials, a fickle group that doesn’t own a TV anymore–let alone watch one.

Synchronized Internet meditations and dance flash mobs  like this are becoming more and more common. Recently, a group called One Billion Rising had an impressive turnout for Dance flash mobs on Valentines Day 2013 — so we can expect this trend to continue to amplify.

While a few generous individuals contributed money to sponsor the December 21 broadcast, including a technology company that supplied some of the sattelite uplink equipment, the December 21 live stream was produced on a shoestring budget by global marketing campaign standards.

The outreach happened by word of mouth over the social networks and enthusiastic volunteers, including a group backed by Hollywood veteran Michael Short, called BeThePeace, which is composed of volunteer industry professionals who have experience with events like the Superbowl and the Academy Awards. It was also assisted by World Unity 2012, Synthesis, Birth2012 and Unify.org, a group of savvy young social marketing branding experts and web developers in San Francisco. who have been creating unified events such as MedMob.

Dozens of PR teams and social marketing teams from all of the festivals collaboratively promoted the December 21 event with their Fan pages and email lists encouraging viral sharing.

The next global event will be Earth Day on April 20, 2013.  The Earth Day festivals, which have been taking place globally for 40 years, now attract a global attendance of 1 billion people in 196 countries. That’s 1/7 of the planet! While not everyone at every EarthDay will be coaxed into dancing and doing yoga — the potential for large numbers are extraordinary. 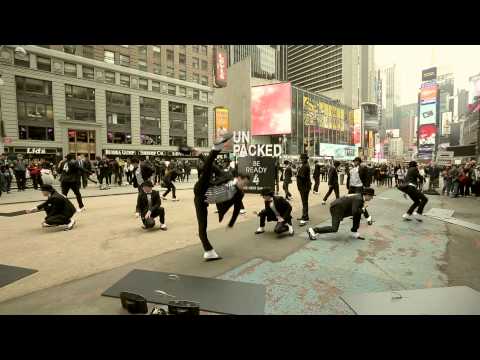 It’s important for brands to recognized that dance, yoga or meditation flash mobs leveraged for advertising must be authentic — the Millennials can see right through hype and do not like to be “marketed” to.

Samsung got ridiculed by the media when they had a fake dance flash mob in New York’s Times Square to launch the new Samsung Galaxy phone.  Reporters called the fake flash mob “cheezy” and “embarrassing.”

Says Adil Kassim, who is one of the masterminds behind #Unify and the upcoming Earth Day yoga and dance flash mob: “Brands want to associate with stuff that matters.”

And Millennials want to associate themselves with brands that matter.

Please share the graphic below on your Fan pages and help get out the word:

The success of the December 21, 2012 broadcast surprised us. I remember standing in Chichen Itza in the modest room where a team of about 10 extremely hard working volunteers (who barely slept during the weekend) running the show on a few monitors and laptops and struggling with the bandwidth issues in Mexico, managed the epicenter of the broadcast.

We were thinking, well, maybe 20 thousand people are watching. When we heard the numbers – 20 MILLION? We were astonished. 20 million people watching a candle ceremony?  This is proof that simple, genuine, spiritual and unifying events can draw more viewers than sports, news or Hollywood blockbuster films.

This broadcast was live streamed on multiple websites, including Barbara Marx Hubbard‘s Birth 2012, The Shift Network, Unify.org and WorldUnity2012.com, simultaneously.  Websites and social media outreach connected these ceremonies at festivals all over the world.

Viewers participated in a synchronized candle ceremony at sunrise — starting at The Uplift Festival at Ayers Rock in Australia, and moving across the planet in waves of synchronized meditation ceremonies, to events in Maui, HI, the Synthesis 2012 festival in Chichen Itza, Mexico, the Stonehenge festival in England, Newgrange monument for the Ireland 2012 festival in Ireland, the Pyramids of Giza in Egypt for a festival produced by the Do Lab of Los Angeles, then Jerusalem and Mt. Fuji in Japan.

People tell me they left their computers running for 72 continuous hours watching the live stream while they did their chores.  They had viewing parties, they were glued to it. They said it was transformational and deeply moving. 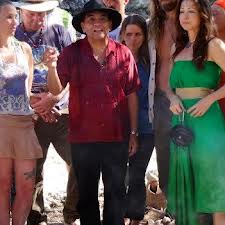 The event didn’t feature any big rock stars — but New Age speakers like Rev. Michael Beckwith of the Agape Church in Los Angeles, author Barbara Marx Hubbard and ceremonies with Mayan and Indigenous elders. The peak viewership moment came when the author of “The Four Agreements,” Don Miguel Ruiz, gave a humble speech while sitting on the edge of the stage in Chichen Itza and swinging his legs back and forth. (Ruiz’ book was on the New York Times bestseller list for more than 7 years.)

A synchronized moment of dance on the beach in Santa Cruz, CA, captured by photographer Marianne Grace: 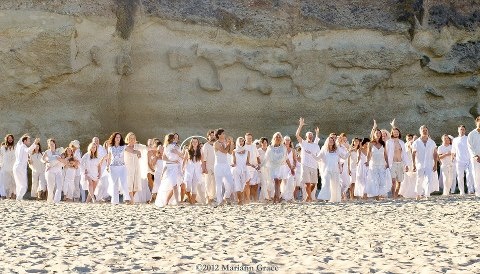 Synchronized Internet meditations and friendly dance flash mobs   are becoming more and more common. We can expect this trend to continue to amplify and draw ever greater numbers, offering a tremendous potential for sustainable brands and global technology companies to sponsor these events for unprecedented global visibility at a fraction of the cost of traditional network television advertising.

If a sponsor would like to leverage the next global unified moment to get out the word about their brand at every Earth Day in the world — reaching up to 1 billion people — please contact: patrick@unify.org

I am a storyteller. I am a bridge between the worlds of high tech and high touch. The main communities I build are between thought leaders in Technology, Entertainment and Sustainability. (Kind of like a TED conference.) These are the early adopters, risk takers and super connected connecters who can set your ideas on fire! As a veteran Silicon Valley tech PR executive and product launch visibility expert, I have launched more than 30 paradigm-shifting products and consumer technology companies in my career -- products that changed your life and are used by tens of millions of consumers. I was on the teams that introduced major innovations we now take for granted -- like email, video editing, ink jet printers and mobile devices. I've promoted products that reached 5 million to 40 million customers -- paying customers, not eyeballs. We did this almost 100% with free PR and social media -- not paid advertising. Increasingly all business must be social, sustainable, sharable and conscious. And I believe social media is the catalyst of this conscious convergence and shift. I've learned that it's not just about "content" or "engagement" -- it's about creating authentic communities around an event that share your news and spread the word for you. I combine social media with press relations, speaking engagements, events, social ads, email lists and street teams to generate waves of awareness that catapult your launch and sustain it. Move forward, into the future. I can help you make a Visibility Shift. View more posts

One thought on “Will synchronized global dance/meditation live streams soon surpass the Superbowl for global viewership?”