With social media, you’re making the news, and telling your own story 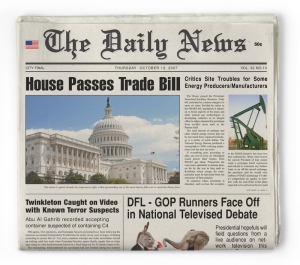 Everyone loves it when they make the “news” and the local paper writes about their business.

Now, with Facebook, You Tube, Twitter and other online communities, or your blog, you’re making the news  and telling your own story.

And your fans and customers respond in a conversation.

Instead of filtering your message through reporters and “experts” — you’re communicating directly to a community.

Instead of a cycle of a days or weeks — your news gets spread in seconds. It’s like sending out a press release five times a day, each one just 140 characters.

This massive, global, two-way conversation is called Social Media. It’s here to stay, my friend. And it’s turning the world upside down.

Facebook now reaches 1 billion of the most influential, affluent and connected people on Earth — in 70 languages. And 70% of Facebook users are outside the US. (Today it’s estimated that 2 billion people, more or less 1/3 of the planet, have access to the Internet.)

Now the numbers are so massive that social media can no longer be ignored.

Hey, social media is the media.

Social media is now also the best way to reach and influence the “mainstream” media.

If you’re not using Social Media to promote your business, you’re missing out on a huge opportunity to find new customers, fans and relationships.

Social media is the most effective marketing and web traffic building tool – ever. It is increasingly the most important, customer facing marketing tool in your arsenal.

WHO READS THE NEWSPAPER?

Today, with the rapid disappearance and shrinking of “mainstream” media, (like newspapers and magazines) you can’t rely on press coverage and ad campaigns to announce your product or ideas anymore.  Most millennials do not read newspapers — the audience for print is not just aging, it’s dying. The new generation cut it’s teeth on cellphones and computers.

Nobody under 70 it seems to me–they watch shows on social media, like YouTube, Vimeo or pay per view like Netflix.  And they discover what to watch from friends on social media.

Most people are too overloaded and ignore them.  Email gets stuck in the spam filter. If you get a 2% response rate you’re lucky. Why bother? If you’re customer is over 50, I recommend email marketing. If you want to stay in touch with your existing customers, email is a good adjunct to a social media Fan page or group. Otherwise it’s a waste of time.

Paper is almost obsolete. The majority of our shopping and commerce now happens online. When’s the last time you learned about something new in the postal mail?

Face to face, personal “social networking” is more effective than ever as a way to cut through the clutter. And it’s an excellent way to drive your customers to your website, Facebook fan page or sign up for your email newsletter to stay in touch. Billboards, trade shows, festivals,  speaking enagagements, events — all great ways to get photographed, video taped and then spread around on the social media.

TRENDSETTERS AND EARLY ADOPTERS ARE ON SOCIAL MEDIA

In order to influence and seed consumers and “early adopters” who will be the first to sign on to a beta programs, try a new product or embrace revolutionary ideas, it’s critical to reach them through, and be seen and heard on the “emerging media” or “social media”.

This is where the trendsetters, hipsters, cutting edge early adopters and most technologically agile people have historically hung out, talk about what’s new, and spread ideas to their friends and colleagues. This isn’t new — it’s been going on since the eighties when “chat rooms” like the Well pioneered what evolved into today’s Internet and social media.

Social media is where the mainstream media get their story ideas and learn what’s new.

These social communities are now as important as newspaper, TV or radio coverage and can be highly targeted.

– vertical, niche social networks for your market (ie for LOHAS they include: Architects of a New Dawn, Waccobb.net, Children of the Light, WiserEarth.)

– Facebook and LinkedIn groups – in high tech, these groups of early adopters and enthusiasts are critical to the success of a new product. For other businesses, such as Fashion, Design or Green, specific networking groups are highly influential, and often have their own social pages.Related articles

2 responses to “With social media, you’re making the news, and telling your own story”